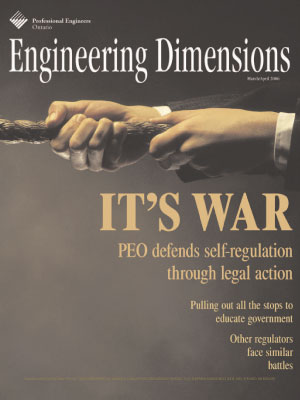 We are professional—and independent

The professions in Canada operate on a unique premise:  self-regulation.  In the United States and most other industrialized countries, the government regulates the professions.  You pay a fee, get a licence, and, if you don't perform to expected standards, usually wind up in court.  The lawyers get rich.

Back in 1922, the Ontario government decided to allow engineers to regulate their own profession.  In essence, a covenant was made:  Government would offload responsibility for setting standards and policing engineering; in exchange, politicians would not meddle in the Association's running of the profession.  This formula has worked exceedingly well; after all, we engineers know engineering best, and it certainly is in our best interest to ensure "bad apples" do not practise.  This arrangement allows government to focus on bigger matters, yet the public can be assured engineers are competent and have integrity.  (The government seems not particularly good at managing our money and the responsibilities it already has!  Think ORNGE, e-Health, gas-plant cancellations, and the green-energy program.)  Lately, there have been numerous criticisms of self-regulation in law and medicine.  We did endure some scrutiny as a result of the tragic mall collapse in Elliot Lake, but otherwise, engineering has been a shining beacon of the effectiveness of the concept.  There is no problem in our admissions or discipline which requires intervention by government or its representatives on our council.

Notwithstanding this covenant—which has worked so well for both parties—the Ontario government attempted, in 2002, to usurp PEO's exclusive jurisdiction via Bill 124.  Among its provisions was a requirement to pass examinations set by the Ministry of Municipal Affairs and Housing on the Ontario Building Code.  At first, PEO attempted to "run to the front of the parade", and maintain some vestige of self-regulation by co-operating in the examination process, but by 2006, the fundamental threat to our independence was recognized, and Council authorized the spending of a half-million dollars to fight it in court.  We won.

More recently, the influence of the eleven government appointees (LGAs) on our council have come under scrutiny as an impediment to our ability to self-regulate.  35 % of our council is appointed, compared with only about 25 % for architects, 20 % for CAs, 16 % for CGAs, 15 % for CMAs, and 10 % for lawyers.  In recent years, several crucial votes relating to PEO's governance and spending were tipped by an apparent block of votes of our LGAs.  I believe our LGAs to be decent, honourable, and committed people, but I think it is time the government had a lesser role in our affairs.  In the past, some LGAs have served eleven consecutive years on Council without having had to face the PEO electorate even once!  A member-elected councillor would have had to run and win six consecutive times to do likewise!  Surely two or three non-engineer LGAs should be sufficient to serve as government's eyes, ears, and voice on our council.

A couple of years ago, Council—without approval from the membership—revised our By-Law to limit how many terms could be served by council members.  The premise was that "new blood" would surge in, revitalizing Council.  In fact, the opposite occurred.  We had three uncontested races in last year's elections.  Worse than that, the wisdom, experience, and knowledge of corporate history and culture from veterans like Peter DeVita and Pat Quinn have been lost.  Frosh councillors are being swept along by the others, and Council recently is repeating the mistakes it made years ago.