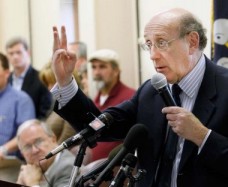 A council which increasingly snubs its membership

Sir Winston Churchill once famously said, "democracy is the worst form of government, except for all those other forms that have been tried from time to time."  Alienation and resentment inevitably result when people feel their governors are not representing their interests or addressing the issues important to them.  Why are the members of PEO so disengaged that almost ninety per cent of them don't vote?  Not voting is how people express their alienation and frustration.  Read my article in the Kingston Whig-Standard here about voter alienation.

Four lines of thinking are devastating PEO, in my opinion:
(1) Many councillors feel that there somehow is a conflict between protecting the public interest and serving the 88,000 members of the profession.  (That is complete and utter nonsense.)  They falsely say we are becoming "a members' club".
(2) Councillors feel the membership is not as smart and well-informed as they are, and hence, the membership should just be quiet and let Council run things,
(3) Council does not believe it is there to represent the membership (although 2/3 of the council was put there by the members), and
(4) Council has been absolutely seized with "governance" instead of addressing the real problems of the profession.

There is no conflict whatsoever between serving the public interest and operating a vibrant, member-directed, democratic profession!  In fact, we members know engineering better than any politician or lay appointee.  That is the very principle behind a self-governing profession, and it is why government, in 1922, granted us self-regulation!  We have never, ever, been accused of shirking our responsibilities.  I have never suggested PEO should be advocating for Ontario engineers.  That's OSPE's job!

Recent councils, in my opinion, have not demonstrated the openness and accommodation we expect of them.  During my 2018-2020 term as Councillor-at-Large, the rules of order were used on several occasions not to facilitate open debate, but to suppress it, by blocking my motions even from being considered!  I objected to secret meetings which were closed to the public and not minuted.  At our 2021 AGM, my motion demanding a halt to this practice was passed.

As for managing the affairs and finances of the Association, well. . .  Council quietly got the government to change the Act, so that it no longer needs members' approval to increase fees or make other major changes.  A couple of years ago, it abused this power to push through a 20 % fee increase, specifically rejecting holding a membership referendum.  No government has ever cured a spending addiction by increasing taxes, and no democratic organization can remain so by eliminating checks and balances on its power!  Thanks to the Covid shutdown, PEO is swimming in money, with an annual budget of about $27 million and assets valued at more than $56 million!

Membership motions too often are shuffled off into bureaucratic oblivion.  My own motion at the 2011 AGM—that changes to our governance be suspended until approved by the membership in a referendum—was not debated because we "ran out of time".  It was forwarded to Council, where nothing further was done about it.  My AGM motion in 2019 to investigate election anomalies was hijacked and framed as a return to the Stone Age, instead of as an attempt to ensure fair and reliable voting.  It was voted down.  Membership resolutions, in any case, seem to have little influence on our council.

The mistaken notion that Council is not there to serve our 88,000 members has grown over the last decade.  Posters have been put up on the walls of the council chamber saying, "REGULATOR OR ASSOCIATION", when they actually should say, "REGULATOR AND ASSOCIATION".  We are told "PEO is not a members' club".  I say, "PEO is not an oligarchs' club"!  The government itself has granted us self-regulation.  It is confident that our membership knows what is best for the profession.  Our council's role is to serve that profession, consistent with offering the highest degree of protection to the public.